Henry Epstein - Save with Cashback | myWorld.com


Henry or King Henry to his friends & fans is a touring professional who simply loves the game of golf and has found a way to combine his unique talent of golf ball control & magic to take golf to a new level. Since he turned professional in 2004 he has enjoyed over 10 continuous years of golf on some of the worlds best courses being a member of the Australasian, Korean, Asian and One Asia Tours.
Henry shot to prominence in November 2001 when he smashed the Guinness World Record for golf ball control by juggling a golf ball between the faces of two sand irons for an amazing 33 minutes and 33 seconds, smashing the old record of 13 mins, 42 seconds. As seen on Australia’s Guinness World Records and Channel Sevens’ Sunrise, Henry now holds a new Guinness World Record at 2 mins, 22 seconds for the longest time an individual can keep a golf ball spinning on the face of a putter.
In 2000 Henry found a way to finance his golfing dream through a deck of cards. His radical approach to magic and unique style gave him a clear advantage over his competitors. Henry has used his close-up magical abilities to maximize profits for charities, entertaining the crowds and tailoring magic tricks to suit specific brands.
What is the Henry Epstein Show?
The Henry Epstein Show is a unique blend of golf ball wizardry & trick shots, magic & entertainment.
This innovative show has entertained high profile groups all over the globe and has appeared on a variety of TV shows and channels such as FOX Sport, ESPN, Star Sport ASIA, AXN, Euro Sport and Australian networks.
If you are looking for the perfect entertainment for your guests; a brand recognised for excitement and unique skill, and a show that can be truly tailored to meet your individual needs, then you need to book the Henry Epstein Show – a show where Henry turns the game of golf into his work of art. 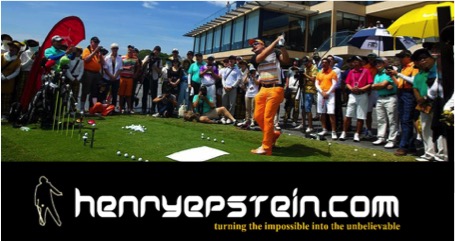 Contact us
< Back
* The margin benefits are dependant on the products purchased and Loyalty Merchant. All hereto information on this website is therefore without guarantee.